War On Drugs Simply Turns From Militaristic To Bureaucratic

The Therapeutic Use of Cannabis Advisory Council, established by the NH state legislature this very year via HB573, and signed into law by the governor on 7/23/2013, herewith holds its latest Regular Meeting in the Legislative Office Building, Concord, NH, 12/19/2013. (See the April Senate hearing here.)

Do please note that the ostensible "public member" is not only a government employee, not only a cop, but a police chief. If you've been following this blog, or the issue of NH prohibition in general, you should be painfully aware that law enforcement has a very definite -- and self-serving -- position on rolling back the "War on People Who Use (Some) Drugs"™, even for those in pain. Even for those dying. They're against it. Unequivocally. Suck it up, employer.

In your humble chronicler's opinion, Chief Shagoury (nor any other enforcer) has no business whatsoever claiming to represent "the public" in this matter. He is no less a representative of servant government than is the HHS representative, or those from the State Board of Medicine or the Dept of Safety or the Dept of "Justice" (who, jbtw, is still feverishly searching, as of this writing, for a means to justify the summary execution at a donut shop of an alleged low-level drug dealer in a 'Keystone Kops drug-sting gone horribly wrong' by Weare PD way back in the middle of August). Indeed, he and his kind quite arguably suffer from an even more distinct, documented and transparent conflict of interest than any other member of this council. 'Gosh, we hadn't noticed...'

This is (still) a stacked deck, dear taxpayer. Long live the unconstitutional, ineffective, and profoundly expensive in both blood and treasure (to say nothing of liberties) drug war. Long live the rogue government... 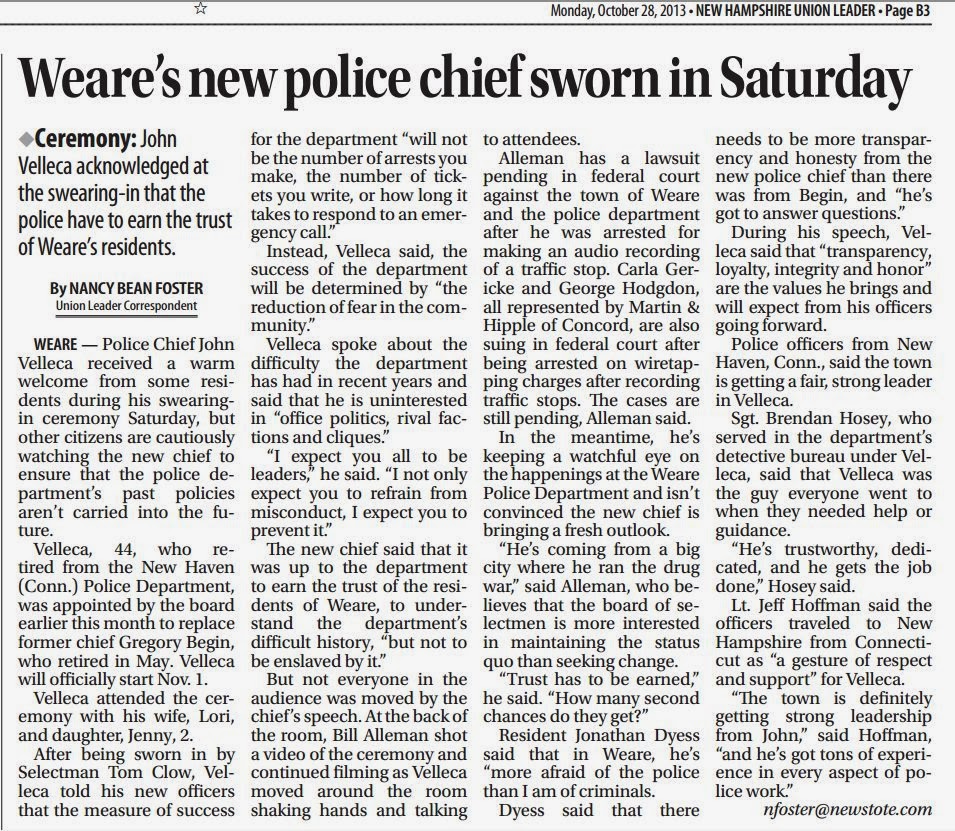 Concord Gets a BEARCAT!

The Concord (NH) City Council reconvenes to pull the Concord PD's federal grant application for a 'BEARCAT' Attack Truck off the table and -- ignoring raucous public outcry rooted in concern for both fiscal conservatism and civil liberties, and including 2 rallies and 1500 petition signatures -- give it an imperviously armored escort to approval, 9/9/2013.

They needed a two-thirds majority vote, and wouldn't ya know, they made it with one vote to spare. Elections are coming, Concord citizens (oh, and the filing period is open until 9/16, if you're of a particularly singular mind)...

If You Don't Tell Your Employees To Stop, Who Will?

NoMoreBearcats.com press conference opposing just the next Concord, NH, 'BEARCAT' Attack Truck, 8/26/2013. If you're a Concord resident, go sign the petition, then come back and watch the video. Go ahead. We'll wait...

The Front Line Against Police Militarization

That's the people, btw. You, in point of fact, dear reader. By special request, some highlighted testimony from the City Council public hearing regarding the acquisition of a ManBearPig-- er, I mean BearCat, AKA, "Ballistic Engineered Armored Response Counter Attack Truck," the "Homeland Security" grant-subsidized (so, your money, regardless) armored attack truck (the manufacturer's description, although the cops prefer the rather more innocuous "rescue vehicle," which isn't exactly prominent in the militarizing marketing materials for some reason) by local law enforcement's Special Operations Unit, in Concord, NH, 8/12/2013. Sign the petition at No More BEARCATS. See the full hearing and links to lots of previous media here.

Why Would 5 Dozen People Help One Family Move?

Mary and Jason "Mr. Free State Project" Sorens -- who additionally explains their motivations here -- arrive in NH to stay. Some friends stop by to welcome them.

Police State Too Much? Send in a Marine!

During testimony at the Concord City Council public hearing regarding the acquisition of a ManBearPig-- er, I mean BearCat, the "Homeland Security" grant-subsidized (so, your money, regardless) armored attack truck (the manufacturer's description, although the cops prefer "rescue vehicle," which isn't exactly prominent in the marketing materials for some reason) by local law enforcement's Special Operations Unit, in Concord, NH, 8/12/2013, there was this little gem from retired Marine Colonel Pete Martino.

"Peter Martino is a citizen of the State of New Hampshire. Mr. Martino is a Colonel in the U.S. Marine Corps Reserve who has been mobilized three times. During his military career, he commanded an infantry platoon, company, and battalion. He was also the senior U.S. adviser to an Iraqi Army brigade. Mr. Martino has had a successful civilian career providing training, consulting, and program management services to private companies and to state and federal agency contractors. Mr. Martino presently holds a top secret security clearance."
2008