WAKE UP AND SMELL THE FASCISM!

Jesus Christ. What the hell does it take, people...?!? 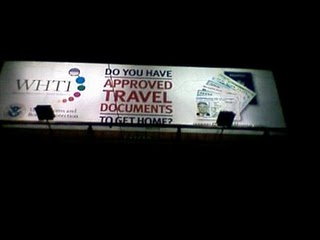 This billboard is part of the Federal Government people's "Department of Homeland Security". You really do have to provide credentials to government people when they say "Papers Please". We don't even need to put on a fake German accent to drive home the oppression of that.

You can't vote to end this at a state level. So the question is, if NOW isn't the time to secede and leave the oppression of the FedGov behind, when is?


"DO YOU HAVE APPROVED TRAVEL DOCUMENTS."

Are ya feelin' the chill yet? Ya really should.

Let's hope the entire NH legislature gets the message -- as it finally did for REAL ID -- for next session's anticipated enhanced version of HCR6, state sovereignty. But what will it take for our federal servants to get the hint? Do we really need to care...?

"Permission" to monitor your servants not so popular with servants

NH Senate Judiciary Committee hearing on HB312: "permitting a person to record a law enforcement officer in the course of such officer's official duties," 5/19/2009

Essentially the same self-serving, dismissive, disingenuous dissembling from law enforcement as they trotted out at February's House hearing. Shouldn't they be required to understand the existing law?

Here's the deal. Taking pictures is already legal. Taking (silent) video is already legal. Holding a camera or a cellphone is already legal. Therefore, the "it might be a gun" argument is specious. Likewise, using a light with those visual image recording devices is not currently prohibited, so they are irrelevant to the question at hand of limiting audio recording. Non-law enforcement private citizens don't lose their rights, so the "they wouldn't be able to object to being recorded" argument is also specious. Breaching a crime scene is equally illegal without an audio recording device as it is with one, so that argument, well, you're seeing the pattern, yes? Right on down the line.

As Rep Joel Winters points out, all this bill does is remove the misapplied wiretapping law as an authoritarian cudgel. Collecting your own evidence in what law enforcement is (needless to say) expecting to be legal jeopardy CANNOT BE ILLEGAL. Erasing that evidence -- and summarily destroying private property without due process -- while the camera is in their custody, however, is another matter entirely...
[EDIT: and Radley agrees with me.]

On the job means on the record. Why does this need to be explained to our employees?

Legislator schedules being what they are (and the Committee Chair is painfully aware of it on this incredibly hectic day she scheduled for herself), Rep Neal Kurk rushed in at the last minute, and signed in on the wrong sheet. Professional courtesy would generally have the Chair allowing him to speak, anyway, but she simply couldn't be bothered. "Sorry, the gavel can't be unbanged. There's nothing I can do. My hands are tied." What a...

Also below, the culminating testimony from Ryan Marvin and Rep Winters.

If a complaint is lodged in the capitol...

...would anybody hear it? NH Representatives Paul Ingbretson and Dan Itse lead an ad hoc House Committee addressing formulation of procedural recommendations for the House Rules Committee (breath) regarding the further adventures of last session's HB1543 and the non-optional -- as in Constitutionally mandated -- restoration of petitions for redress of grievance in the NH Legislature, 4/30/2009. Follow the backstory here and here and here.