What? Where? The Pine Tree Riot? One of the first acts of rebellion by the American colonists in their struggle for independence? Yeah, you know Weare. A celebration of the Pine Tree Riot for its 250th anniversary, Weare, NH, 4/9/2022. And you thought we wouldn't make it... 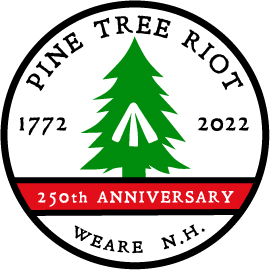 The Weare Historical Society is commemorating and celebrating the 250th Anniversary of the Pine Tree Riot, one of the first acts of rebellion against the crown that later inspired the Boston Tea Party.

You'll have an opportunity to meet descendants, purchase Pine Tree Riot merch, sign the commemorative pine board and be included in the group aerial photograph.

Kick off the fun early! Sue Edge of the Weare Historical Society will offer a lecture overviewing the Pine Tree Riot at Weare Middle School on March 29 at 6:30 p.m. 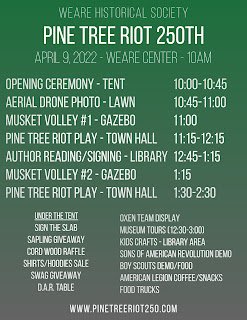 Certainly, the subsequent war of secession wasn't precipitated by the colonists' desire for independence -- which itself is entirely peaceful, like an uncontested divorce -- but rather by the British empire's reaction to it -- which was anything but, as is so sadly typical of entitled empires. If, instead, the Brits had said, "Sorry to see ya go, have a happy life," things would surely have been different. Nevertheless, do keep celebrating Secession Day every July 4th!

Pine Tree Riot 'Temporary Marker' Ceremony
Tom Flaherty and the Weare Historical Society compensate for the state of NH's tardiness -- despite having a quarter-millennium to prepare -- and supply, April, 8, 2022, a temporary marker just in time for the Pine Tree Riot's Sestercentennial Celebration the following day, in Weare. The state promises to have the permanent marker ready in a year or so...
Pine Tree Riot Commemoration and Celebration
On the occasion of its 250th anniversary, Town of Weare, April 9, 2022.
'Ebenezer Mudgett & the Pine Tree Riot'
A dramatization of the book by Connie Evans, presented by the Weare Community Theater, Weare, NH, April 9, 2022.
Posted by Bill at 6:03 PM 1 comment:

Well, before next year's Sestercentennial, anyway. You're not gonna miss that one, are ya...?

What? Where? The Pine Tree Riot? One of the first acts of rebellion by the American colonists? Yeah, you know Weare. A celebration of the Pine Tree Riot for its 249th anniversary, Weare, NH, 4/17/2021...

Join Americans for Prosperity New Hampshire in commemorating one of the earliest organized acts of American resistance against British tyranny as we celebrate the 249th anniversary of the Pine tree riot which occurred in 1772 in Weare, New Hampshire. Long a symbol of centralized government overreach, the Pine Tree Riot was a testament to the spirit of independence, freedom, and the New Hampshire way of life. Therefore, it is fitting that the celebration of the anniversary of the spark of the American Revolution takes place during the same week as the day Americans are normally forced to hand over their hard earned money to an overgrown federal government.

Today, both the State and Federal government make a habit of increasing the burden on taxpayers by continually growing Washington based programs without any expectation of accountability. We have an incredible opportunity to roll back those burdens, the NH State legislature is considering reforms on taxes in this year's budget. It is up to WE the people, to ensure those in elected office live up to their promises of lifting the weight of government from the backs of the taxpayers.

Government in the Time of Increasing Orchestrated Indifference

I needed to register a new-to-me vehicle that I purchased in MA on 8/31. I obediently followed, to the letter (but also including, undemanded and additionally, my phone number on the envelope), the instructions published on the NH DMV's own website to obtain the mandated temporary plates so that I could go retrieve my property without being accosted and plundered by opportunistic legalized road agents.

I submitted on 9/1 all demanded paperwork via the prescribed "dropbox" (because that's now the only acceptable mechanism for this transaction, in the age of irrational hysteria) at the "officially closed -- no appointments, even" Milford, NH, DMV outpost. On that "dropbox", notably, there is (or maybe at this point, was?) posted a sign that says in part, "Transactions will be processed within 24~48 hours. Unless otherwise noted the documents will be mailed to you." (emphasis your humble chronicler's)
I have yet, and also notably, to find any notation otherwise. So I obediently waited for my plates. My government wouldn't mislead me...

Around 3:30 or so on the afternoon of 9/9, still waiting, I (finally) called 603-227-4030, to be eventually connected, after over an hour on hold ("unusual volume" compared to what, exactly?), to someone who, confident she didn't work for me, clearly simply could not have cared less if I'd paid her extra to do so, and eventually hung up on me, "I-don't-have-to-listen-to-this-'cuz-you're-not-the-boss-of-me"-style, rather than answer uncomfortable questions -- as a competitive, customer-focused business would require that she do -- if it wanted to survive, anyway.

I was told, essentially, that nobody knew nothin'. That, jeeze, says here the plates were ready and waiting in Milford! Had been, in fact, since 9/2, whaddaya want from us? That the DMV had, in fact, dearly wanted to contact me, but didn't have my contact info. Didn't have my contact info. The DMV. Yes, the Dept of "Safety". Arguably the heart of the police state.
And this was even despite my phone number having been helpfully printed on the envelope (remember the phone number on the envelope?) in which the paperwork (including the check that had nevertheless been cashed the week prior) was contained. That I was supposed to have known that I was supposed to do... well, something. Call them, maybe? At some time? At the office that officially isn't even open ('cuz, and among other things, the plates wouldn't be anywhere other than that closed office, right?)? And I should also somehow know to knock at the outwardly deserted outpost, with the "special" knock, hoping somebody just materialized. And I should know not to question my employees. EVER.
So the DMV having nowhere requested this suspiciously systemically missing -- and, indeed, unnecessary, since everything is gonna be, y'know, "mailed to you", right? -- data, how do you normally proactively contact your customers in situations similar to this where there aren't even any "complications"? How many of them nevertheless volunteer the data you somehow don't realize you need, right there on the envelope where you can't miss it?

No, she had not even the slightest passing interest in hearing a puny opinion that her system was fundamentally broken and consumer-unfriendly -- as if that would have been a problem, even if it were possible. Address it? Uh-uh. Suck it up. Not her department, anyway. <*click*> Hell, this is government: that department doesn't exist. Besides, even if, for some inexplicable reason, it had existed, like Washington's Monument, it would have been the first "service" on the chopping block. Long, long ago. 'We don't care. We don't have to. We're the fiat monopoly.' You ungrateful taxpayers, you...
And so now on 9/9, I (finally) have temp plates, prominently dated 9/2 (which is already a day later than I would have had them, in saner times), that nevertheless are good for only 20 days and need to get an inspection in 10 days, 7 of which are already gone. Do not even try to tell me that your enforcers "will understand" -- I'm telling you about my most recent experience with your officious bureaucrats right here.
I'm only now (finally) intending to pick up the truck to which they're to be attached tomorrow, 9/10, and proceed to the "registration" phase of this sadistic farce (not really, 'cuz as I belatedly remember, my town offices close at 1 on Thursdays, so I'm not putting this shitshow behind me quite yet -- 9/11 is really more appropriate anyway, don'tcha think...?).
And for those playing along at home, that will be 9 of 10 days gone -- and #10 would be a Saturday. Because my "servant" government has screwed me and exasperated me - without consequence, without remorse, with self-assured dismissive indifference -- yet again. And the thing is, I know I'm not alone. So do you.
And you refuse to even be ashamed, DMV. Ahh, to be unaccountable government...
Yes, I am personally well aware that there are <shudder> far worse DMVs than NH's out there. That excuses exactly nothing. Please assure me that's not your metric for grading mandatory force-monopoly government "services". Or politicians, for that matter...
And now, in this "shitshow-on-steroids" year of 2020, it's worse still. By fiat. Thanks, government...!!
But then, relentlessly making life more arduous (and expensive) -- at its own whim -- is why We the People instituted government, right...?
Posted by Bill at 5:57 PM No comments: