adventures in the apiary: the inception

It was mid-40s and calm for hiving our first bee package -- 3lbs, 10k bees (Carniolan queen), 8-frame Langstroth (a Flow Hive, actually, although that's an entirely irrelevant distinction until the last honey super goes on) -- mid Saturday afternoon, 4/9/2016. Lower mortality in shipping than I'd anticipated, really. 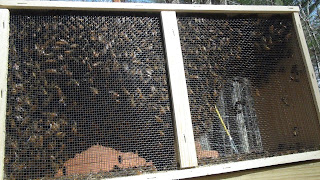 New JZBZ plastic queen cages, it turns out, while I was prepared to deal with the traditional ones. Only way I could get it not to fall (without spending a whole lot of time cogitating on it real-time in less than ideal temps) was to put a toothpick through it, and let it hang candy-end-down from the top of the frames. No attendants in there with her, but could still be dangerous. Not pleased. Drawn comb should hold it up, but I ain't got none o' that yet, so...  When I have some more time to inspect it after removal, a better solution may well present itself for next time. (It would seem that the additional step of then setting the tube on top of another toothpick should work.)

Scout bees took flight fairly quickly. No outside activity by Saturday dusk, not surprisingly, with temps pushing 40° in the wrong direction, but also dead quiet inside, which didn't seem good. Similar Sunday morning, but some scouts and guards eventually ventured out, some disposing of the dead. Still disconcertingly quiet, though.

By dusk Sunday, I could finally hear a very faint buzz emanating from the screened bottom board. Gonna wait until Wednesday, I think (after the next forecasted rain, conveniently), before checking the frame feeder and the troublingly inverted queen cage, and verify that comb is being drawn. Go back again next weekend to first look for eggs...

Btw, I can hear it already, so this video is intended more as instructional than as artistic. Hit the 'gear' icon to speed it up, and quitcher whining...